ECOTREAT approach involves the development of a textile wastewater treatment system characterized by high cleaning performances and lower costs in comparison with the current state of the art. The project has been focused on the investigation of clay minerals for the removal of organic pollutants from aqueous solutions using the liquid-solid adsorption technique. The new system proposed in this project is based on the development of a natural adsorbent material to be used in decontamination process of dyes containing effluents in a textile industrial plant in Turkey.

The innovation of the proposed approach is related to the utilization of a chemical modified sodium bentonite as efficient adsorbent for anionic dyes removal from textile wastewaters. The adsorption unit can be easily integrated in a multistage wastewater treatment plant and applied to a textile treatment line with high quality requirements. The application of a cost effective and efficient adsorption system for textile wastewaters treatment is important for both economical and environmental benefits.

Laboratory adsorption experiments with low cost natural materials showed the Romanian bentonite, a layered type aluminosilicate is a potential adsorbent for the removal of dyes from aqueous solutions. The batch adsorption technique has been experienced and a surface modification method has been investigated to improve the adsorption capacity of sodium bentonite to remove anionic dyes, a representative class of dyes used in textile industrial plants in Turkey. Replacing the exchangeable inorganic cations (Na+) with quaternary ammonium salts such as cetyltrimethylammonium bromide-CTAB enhanced the adsorption capacity by changing the bentonite surface from hydrophilic to hydrophobic. The modification of the adsorbent by the intercalation of cetyltrimethylammonium cation C16H33 (CH3))3 N+ between silicate layers has been evidenced by XRD, FTIR, TGA and BET techniques.

The adsorption capacity improvement of hybrid organic – inorganic materials such as CTAB – Sodium bentonite for the removal of the following synthetic anionic dyes: Acid Red 1, Remazol Brilliant Blue R, Reactive Yellow 145 and Reactive Black 5, respectively has been proved. The influence of various operating parameters has been investigated and the adsorption efficiency has been found to be dependent on dye solution concentration, pH and contact time, respectively. The adsorption performance onto CTAB – Sodium bentonite was in the range 80 – 97% depending on the dye type in connection with pH and concentration of the initial dye solution. The selected organic modified sodium bentonite has been taken into account to prepare a prototype adsorbent.

Adsorption testing using selected working conditions, namely: pH 10-11, adsorbent/dye solution ratio of 10 g/L and contact time of 120 minutes has been performed in order to check the performance of prototype adsorbent. The maximum adsorption efficiency for reactive dye removal (95-100%) has been achieved for azo dyes (Reactive Yellow 145 and Cibacron Brilliant Red 3B-A) and anthraquinone dye (Remazol Brilliant Blue R), respectively. The variations in adsorption capacity as a function of the initial dye concentration suggested different adsorption mechanisms occurred depending on the adsorbent surface charge in connection with hydrophilic properties of dye molecule.

The adsorption capacity for dyes mixture containing solutions has also been evaluated. The adsorption experiments using binary and ternary dyes mixtures are to be considered of practical importance taking into account the complexity of textile effluents composition associated with the presence of different dyes mixtures. 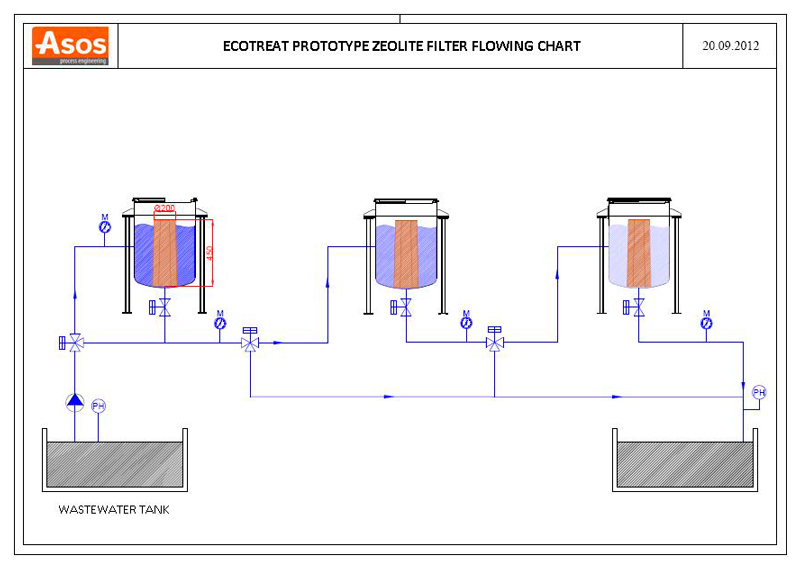