Many parts are faced to high mechanical stresses when they are used in production. Deterioration of parts is easily taking place in the highly stressed area, including abrasive and adhesive wear, cracks and distortions. An opportunity to avoid this is to enhance the wear resistance, e.g. the hardness of these areas, by modifying the material structure or compounding of the part's surface. Since the steadily increasing opportunity for automation and increased processing speed, laser process can play a key role for surface treatment and thus contribute to the needs of nowadays high technology production. It can be forseen that the laser surface treatment will become even more important for production of single items and small batches which will be focused on future production especially in high wage countries in Europe, like Germany and Austria where the participating partners come from.

Laser Hardening tests with 4.5kW and 5kW Diode Lasers were successfully conducted by the Fraunhofer Institute for Production Technology IPT, however, exhibit deviations in the hardess measurements. The results of the FEM analysis for the laser hardening process are matching the results of the real process. Hardening measurements of overlap tests are continued to be conducted to achieve the minimal hardening depth between two tracks. Evolute has developed and proposed the proper surface segmentation as NURBS and triangle mesh surfaces. In the project, EXAPT has completed the CAM module for the laser path calculation as well as the structure to represent different laser areas and the identification of the areas for IPT-Laser movement. A postprocessing function to output different laser commands based on the laser treated area have been developed as well. ModuleWorks is continuing its work on the path calculation and integration of the CAM module with post-processor. Within the project Sim4SurfT Ponez provides demonstrator parts for process testing, demonstration and verification for the purpose of usability in the real environment.

An initial application at the demonstrator part shows hardening process with different corner radii. A challenge became by overheating of smaller zones. When the process is completely developed, it becomes possible to hardening stressed areas of freeform surfaces e.g. at moulds and dies. 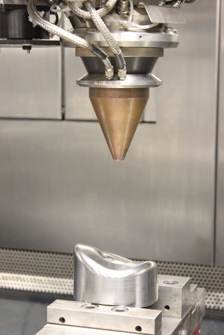 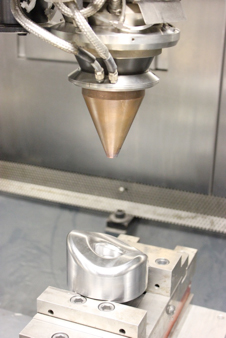 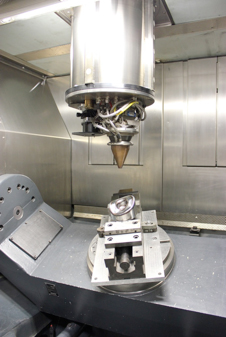